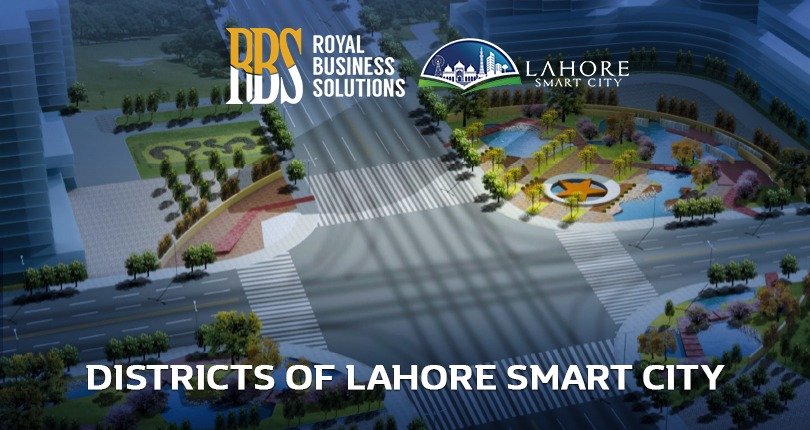 Lahore Smart City is smartly divided into seven districts. Every District tells its own story and presents its own picture. Division of districts is done in such a way that it fulfills the needs of the city in future years. Here are all the districts of Lahore Smart City.

Executive block presents luxury living for residents as it provides luxury apartments and residential plots of 5 Marla, 10 Marla & 1 Kanal. A well-planned marketplace is also designed for this block specifically. Schools are essential for building a strong future, educational institutes are also planed in executive block whereas a state-of-the-art Mosque has been designed. An International standard hospital is also ensured with established clinics.

Sports play an important role in building a nation as Pakistan has produced many national heroes in this field. Lahore smart City has designated a district for sports activities. The sports zone consists of a well-equipped Football stadium, an ICC standard Cricket stadium to promote international cricket in Pakistan, and if you are a passionate racer you will also get access to an ample racing track. Not just that sports district also provides luxurious apartments to provide comfort to residents. The retail place is also included in the sports district.

Education is building block of a nation. Lahore Smart City’s Master plan includes a vast portion of land for carrying out educational activities in the city. This district focuses on many educational institutions including an international standard university, colleges, a medical college, and research facilities. City also tends to build institutes to develop the skills of youth and provide short courses to compete with today’s world. Day care centers jogging pathways and retail area is also in the list.

Theme Park is situated at the 2nd roundabout of Lahore Smart City. It covers a huge area of land which includes many eye-catching views. The theme park consists of a grand bird park including various species of local and imported birds. Weekend resorts will be in service for giving quality time after a busy week. To keep the cultural heritage alive street food truck park will also be located in a theme park. The commercial area also lies in the middle of the theme park.

Silicon valley will be featuring many aspects of Technology. Lahore Smart City tends to build a technology zone that enhances youth to take a step forward in today’s world modern researches. This will be the ultimate place for those individuals who are tending to go ahead in this field. The district includes warehouses, IT campus, corporate offices, retail area, and residential apartments as well.

The Residents would be provided with all the basic and advance health facilities by Healthcare districts. Healthcare experts will be in 24/7 services to provide their expertise. Updated medical labs will be in services as well. The state-of-the-art hospital will facilitate patients and will be giving first aid training as well.

Muslim community focuses on strong belief and faith in Allah Almighty and that Muhammad(S.A.W) is the last Prophet of Allah. We are being enforced by religion to pray five times a day, Moreover, there are many religious events that happen around the year and people gather in huge numbers, to meet these circumstances a Grand Jamia Mosque is also in the master plan of the city. Other than the Grand Jamia Mosque sector mosques are also in the plan.