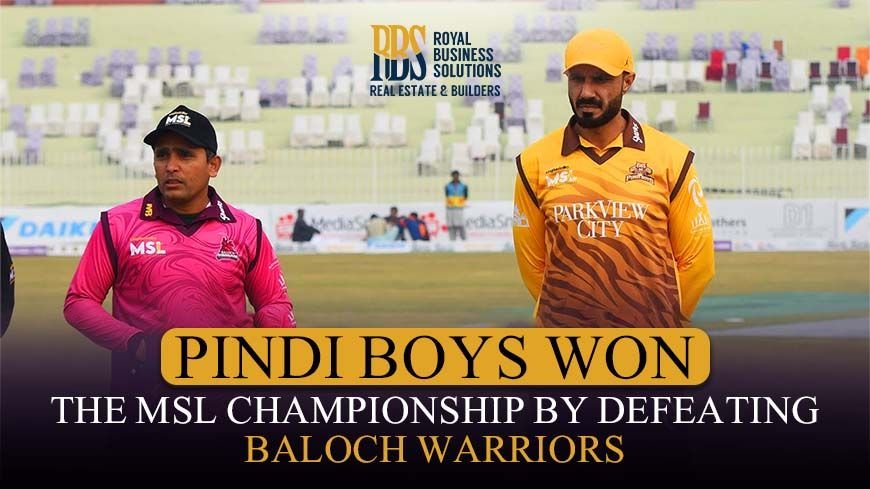 Pindi Boys won the MSL championship by defeating the Baloch Warriors by 50 wickets.

Rawalpindi: In cooperation with RBS and Media Sniffers, MSL Cricket League held at Rawalpindi Cricket Stadium. This amazing cricket tournament, which took place from December 18 to December 25, had four teams. Pindi Boys, Islamabad Royals, Baloch Warriors, and Karachi Knights were among those who took part.

This T10 cricket competition is made more intriguing by the idea of “Cricketainment” overall. It is a magnificent fusion of cricket and entertainment and is the first attempt in the history of cricket.

In this season of MSL, the big stars of the cricket industry participated in full, including Shahid Khan Afridi, Musabh ul Haq, Abdul Razzaq, Imran Nazir, Inzamam ul Haq, Muhammad Hafeez, and Adnan Akmal showed the essence of their batting in this wonderful event.

In addition to this, this MSL event gave chance to numerous new players to fully showcase their abilities. The MSL competition aims to showcase Pakistan’s fresh talent. In this massive competition, total 22 matches played, and the teams Pindi Boys and Baloch Warriors went to the finals.

The team Pindi Boys performed brilliantly and won the title of MSL by defeating Baloch Warriors by ten wickets in the final. In this mega event of Kingdom Valley, superstars of the media industry such as Adnan Siddiqui, Humayun Saeed, Mamarrana, and Hamid Mirawar Kashif Abbasi participated. A big name in the journalist community also participated in these wonderful competitions. However, Pindi Boys won the MSL Championship by defeating Balochistan warriors.

For the fans, the week-long concert night in this season of MSL ruled the hearts of the fans. Bhumika, Mustafa Zaid, Umair Jaswal, Janoon Band, and Natasha Baig showed their vocal powers. Further, in the closing ceremony of the mega event, the management gave a donation check of 10 crores to the Shahid Afridi Foundation.