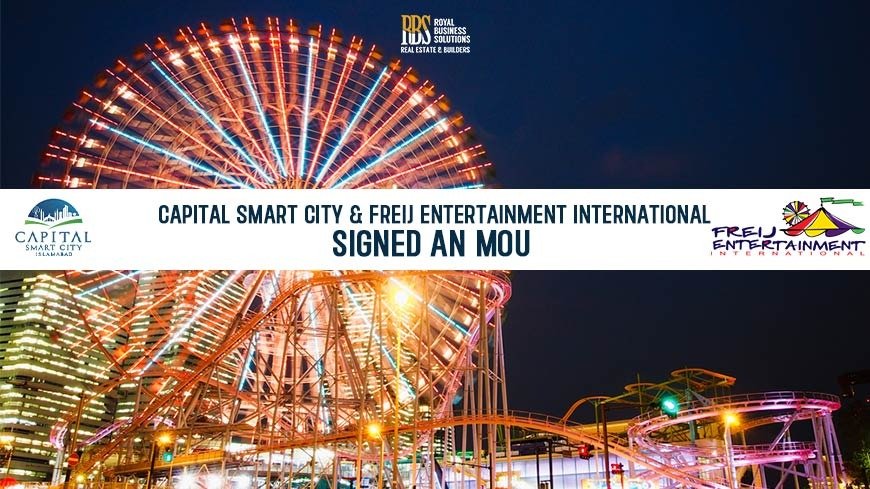 Capital Smart City Islamabad in collaboration with Freij Entertainment is bringing an international standard amusement park. An agreement has signed between both the firms. The overall development period announced as 3 years. Meanwhile, the operational activities will start within 2 years.

Freij Entertainment international is a world largest firm in arranging Carnival events and also arranging recreational activities. Chief Executive Officer, Freij El Zein expressed his deep satisfaction in investing in Pakistan. Furthermore, he said Pakistanis are the happiest nation on the earth. Also, the standard of living in Pakistan is increasing day by day.

Imran Zahid, Chief Commercial Officer was also present in the signing ceremony. He believed that the investment of international firms in Pakistan is a good sign for Pakistan’s economy. It will help to boost up the positive image of the country. Furthermore, Freij Entertainment international will also work in other major cities of Pakistan including Lahore, Karachi, Multan, said Imran Zahid.

The Amusement park consists of over 200 acres of land. It will feature a number of amenities in this park including

The amusement park will feature

As per latest updates, it is installing 4 mega rides, 14 medium-ranges rides and 105 small-range rides.

It has a history of working particularly in almost every big country of the world including Bangkok, Malaysia, Singapore, India, Hong Kong, Dubai, Oman, Salalah, Saudi Arabia, Kuwait, Qatar, Bahrain. Also, it hosted splendid shows in Europe and America as well. Furthermore, it offers more than 50 rides and 60 skill games plus challenge games in a show as well.